Memories of My Grandmother: Passing The Faith Along

One of the most memorable days of my childhood occurred on June 5, 1991. That was the day my grandmother, Geneva McKinley, passed away at the age of 63. Although nearly 30 years have passed since that day, I retain a handful of precious memories of my grandmother.

I remember the sound of her voice when she spoke, the melting warmth of her hugs, the wrinkles that would show in her face when she smiled widely, and how she could yodel better than any Hollywood cowgirl!

But I have some memories more precious than those.

I can remember how worn her Bible was. I remember the intensity of her voice as she prayed. And, I can still hear her voice singing, “I heard an old, old story, How a Savior came from glory.” At some of the most desperate, crisis moments on my spiritual journey, that sound has often faintly returned to my ear.

My grandmother was a Pentecostal preacher, who loved people, and gave all she could to pursue the high calling of ministry, until she ultimately had nothing left to give and died at a relatively early age.

I can tell you one more thing about my grandmother: she thought I “hung the moon” and I never doubted that fact for one moment.

In most healthy, connected families, grandparents are pretty special to their grandchildren. If you came from such a family, can you remember the feeling you had when you knew you were going to see your grandparents? One of my great joys is to watch my children express the same excitement I once did for my grandparents when they know they are going to spend time with theirs.

Over the past year, I have had a passionate desire to not only help those I serve to understand the incredible influence that parents and grandparents have in the lives of the children we minister to, but also to equip them with resources to engage these influencers in the faith formation of children.

A new study released last month by Barna Research restated an incredible statistic we’ve known all along. It found that more than 1/3 of practicing Christians credited their faith foundation to a grandparent, second only to parental influence.

The ministry I oversee is working to develop tools and strategies for local churches to engage grandparents in the spiritual formation and discipleship of their grandchildren; the kids they love the most. Recently, I came across an insightful finding by Matthew Deprez, a south campus pastor at Frontline Community Church in Byron Center, Michigan.

While studies, like the one mentioned above, suggest that grandparents are some of the greatest spiritual influences for a child, Deprez’s research revealed that the most significant ways grandparents influence grandchildren is not in teaching them practices such as reading the Bible, praying, or even discussing doctrine. Instead, their influence is found in modeling and guiding children on their spiritual journey. By cultivating their own personal faith, grandparents leave an indelible mark on the lives of their grandchildren (Deprez, 2017, p. 120). 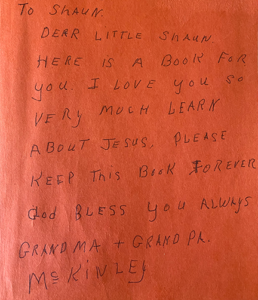 Inscription by my grandparents in the “My Book of Bible Stories.”

As I consider my grandmother’s influence on my spiritual journey, this rings true. Remember my memories? What were the activities that she engaged in that left a mark? I believe they include:

Grandparents, take a moment today. Write your grandchildren a love note today. FaceTime them or call them. Talk about their day, their activities, and interests….and pray for them before you let them go.

What are some ways your grandparents modeled faith for you? I’d love to read them in the comments below!